A day doesn’t pass in my life where I don’t receive a call from someone who is going through some kind of struggle or wanting to share some form of a victory. Today was no different. I received a call from a person near and very dear to me. It had been a while since we caught up. I asked the magic question, “What’s going on?” and off we went. He began to share about some struggles and how he got through them. We spoke about the difficulty he experiences in asking for help. Then he said, “Before we go any further, I have to tell you one thing that really was special. But first I have to ask, you do you have a Glob?” Of course, I responded with “What the fuck is a Glob?” He explained that a glob was the word he invented for the human dilemma of believing there is something you’ve done or haven’t done. Or something about you that is so abhorrent that you could never tell anyone. The shame associated with this is so great that you believe if you share it with anyone or if anyone found out, your life would be over. 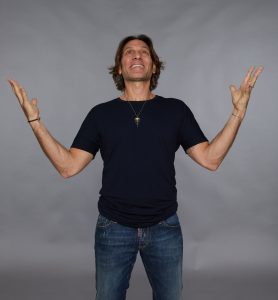 I commended him for naming this awful trait and then I answered his question; “I don’t have a Glob”. He wasn’t expecting that answer. He said before you tell me how in the hell you don’t have one, let me tell you what happened. He shared a lovely story about a friend he’s had for decades who had called him to talk. Their friendship was a one-way street in terms of intimacy. My friend has been an open book. His friend not so much. Their meeting marked the first time this man shared himself. He had a Glob. He was suffering deeply because of it, and he shared it. He had an affair and was caught. He was shamed by his wife and adult kids, and he kept it a secret from everyone else.

He shared a bit more of the story which entailed the relief his friend found in opening up and then we returned back to us. He continued that he had shared this story with his girlfriend, and they decided to share their Globs with each other. The subsequent joy that came from letting them go, having them be heard and being accepted and loved after was one of, if not, the greatest experiences of his life. We then spent the next 90 minutes dissecting what this Glob is and how it slowly destroys any chance for happiness. Here are the excerpts, enjoy…

A Glob has no relative awfulness. This means that everyone feels the same shame regardless of the offense. I’ve worked with folks that have felt like a fraud for decades because of a test they cheated on in 5th grade! This same fraudulent feeling is felt by a person who has been cheating his business partner for years. One seems like such a little offense and the other huge, yet the same psychological set is experienced by both. A Glob is the seed that which grows fear, walls, self-doubt and worthlessness. How? A Glob keeps feeding off the thought, “if they only knew”… As long as we listen to that line of thinking, we remain separate from the world and as long as we are separate, we will suffer from the symptoms above. There is no fear, there are no walls, and there can’t be self-doubt or worthlessness when there in oneness. Thus, the Glob is the cause of misery, not whatever we believe the offense to be. It’s not that you lied, stole, cheated, hurt someone, manipulated, abused, whored yourself or whatever the hell happened to you. It is your relationship with it that is creating the mess. Once over, you aren’t alone. You aren’t the only one, not by a long shot. Yet that’s the way it “feels”. This feeling becomes fact. Life gets cemented in it and leaves us a fucking mess. No matter what good we do. No matter how many years pass, the Glob wins unless…

The Glob doesn’t want you to know it has a glaring weakness. The fact is that the antidote works so quickly even if you’ve been suffering for years. The Glob spends its life span with one mission; convincing you that you will never say a word. Why? Because the moment you share it, the second you hear yourself speaking out, speaking up, the Glob begins to disappear. It’s like turning a nightlight on in a dark bathroom. The moment the light gets switched on is the moment the darkness disappears. The Glob is a lie. It’s an illusion and it can’t hold up to the exposure. Now listen closely! I am not saying the hurt you caused or received is a lie. I am saying the relationship you have with it is. This means the way you internalize, think and feel about it, is bullshit. How can I say this? Because you wouldn’t have the Glob otherwise. What gives birth to the Glob is your perception, or we can say it’s not the action but your reaction. The same thing can be done by another, or done to another, and no Glob. Feeling remorse or hurt isn’t a Glob. Feeling shame, isolation, despair, and worthlessness is.

As with most solutions, the answer is in opposition with the problem which makes things tricky. Will you go tell someone today about your Glob? Some of you will. This blog is enough to push you over the edge and that is amazing. But for most, we need to build the skills that will give us the courage and strength to break free from this prison. You most definitely need the right person to share this with. This is not an announcement one makes on social media. This takes careful consideration and often the first step is hiring a professional to help. Sharing with someone who is trained in these kinds of things ensures the safety needed to begin to release the Glob. Don’t wait a day longer any of you. Today is the day. Find the help you need one way or another and free yourself so you can be yourself.

As for me, well, all I ever knew was a Glob. From the moment I can remember I felt something was wrong with me. Sure, shit happened along the way. Sexual, verbal, physical abuse and learning disabilities to name a few. But before those occurred, I had already convinced myself that I was broken and no one could know. The result landed me in a drug rehab thirty days before my 18th birthday. There I heard people talking about their Globs. I had never heard anything like it and for the first time ever I felt “normal”. That cloud of gloom was lifting, and I hadn’t even shared my Glob yet. I’ll never forget the shift in me from a desperate sense of needing to hide my secrets to unknown excitement to share them; I’ve never looked back. By no means am I perfect. In fact, the only thing I’m perfect at is fucking up; but no Globs. Once I saw the truth in life, which is everyone suffers, everyone lies to themselves and every person lacks self-control, in one way or another. Then the silliest thing in the world is to be ashamed of being like everyone else. The Glob’s hold on us is “no one will understand”, “they will think less of you”. Its hope is that in pulling us away from each other we won’t find out what I have and so many others have about one another. There is no one who is unique. There is no one who is better or worse. We are all in the same boat, suffering from the same affliction; emotional ignorance and needing the same solution, Emotional Empowerment.